Research never seems to finish. In the 1994 issue of the Hay Bay Guardian, the story of Samuel Coate was given [see “Samuel Coate; A Fallen Meteor,” pages 11-18]. He served over ten years in Canada, married a niece of Barbara Heck, and was the chief instrument in building the first Methodist chapel in Montreal, touring England and the States to raise funds for it. At that time we had no dates of his birth or death.

Rev. Robert Steelman of the Commission on Archives and History of the Southern New Jersey Annual Conference of the United Methodist Church, responded to our enquiry with several pieces of information about Coate, including his obituary in the Minutes of Conference for 1814. It was customary to only publish obituaries of preachers who died while connected to the Conference. Coate had located in 1810, thus severing his relation to that body, and thus we had not expected to find his memorial there. A preamble indicates that an exception to that rule was made in this case:

“The following Memoir was sent to the Editors by Mr. M. Coate, with a request from Bishop Asbury and the relatives of Mr. Coate, for it to be inserted in the Annual Minutes. From S. Coate’s long and reputable standing, we have thought proper to deviate a little from our usual custom, and insert this memoir here, that his numerous friends and acquaintance may see that his end was peace.”

“Samuel Coate was born on the 17th of January in the year of our Lord 1776, in the Township of Evesham and County of Burlington, in the state of New Jersey.”

The name of the community was Lumberton, about 20 miles due east of Philadelphia, Mr. Steelman explained. The memoir goes on to describe his conversion, early lay preaching, and itinerant circuits which Samuel served. His journey to Canada includes these details:

“In 1796 he volunteered as a missionary to Upper Canada, and tore himself from his native Country and his father’s house to go into a strange land to preach the gospel. On his journey, with his worthy colleague H.C. [Hezekiah Calvin] Wooster (now with God) he had to encounter great difficulties. He laid on the ground twenty three nights with nothing but a blanket and sometimes a little straw; and being longer on the way than they expected, their provisions almost failed. so that they were reduced to two scanty meals a day, and those of an indifferend kind; but at length arriving at the place of their destination they were fully compensated for their sufferings by the cordiality with which they were received. Here they resolved to preach and enforce the doctrine of sanctification, and soon saw the fruit of their labors in a great revival of religion, in which many were made the happy subjects both of justifying and sanctifying grace. The great exertions of our brother Coate in that revival, laid the foundation of those afflictions which followed him to the grave.”

The obituary, too long to be quoted here in full, closes with some surprising details about his latter days:

“In 1810, being too infirm to do the duties of a circuit, and feeling some delicacy about asking a supernumerary station (supposing that some in the conference might be opposed to it), he took a location, but afterwards was in such distress about it that he could not rest day or night, for it was like tearing a limb from his body to be separated from the travelling connexion, which he loved as his own soul.

“After this he entered into the mercantile business in Montreal, but not succeeding as he expected, he gave it up. He then undertook another voyage to England, partly for his health, and partly to publish a curious piece of penmanship which he had written, and had been advised to print; but just as he was about to put it to press he was taken ill, and in addition to his other afflictions, a white swelling came in his right knee; after suffering from it the most excruciating pain for some months, he submitted to an amputation. He survived this dreadful operation between three and four months, and departed this life on the 20th of December, 1813, in great peace of mind, and in full confidence of entering into the joy of his Lord, aged thirty-seven years and eleven months, and was interred in the new chapel, City Road, London.” 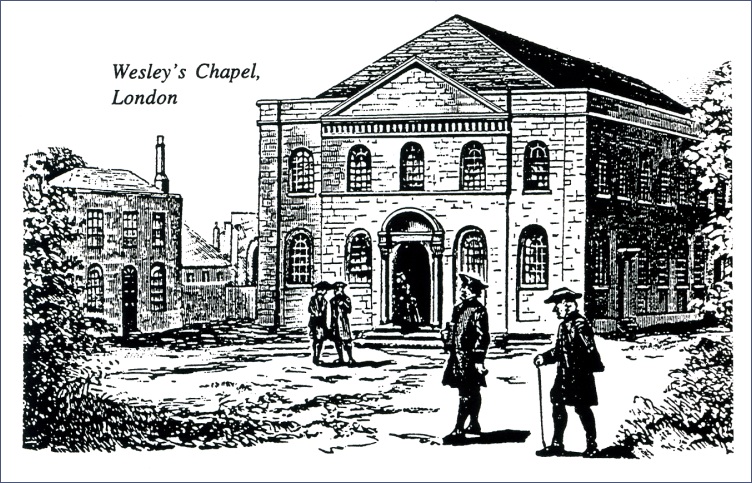 Wesley’s Chapel in City Road, was built to John Wesley’s directions in 1777-78. Behind the chapel is a burial ground where Wesley was buried in 1791. He had once said “I should like to be buried here, and on the morning of the resurrection rise with all my children around me.” The latter phrase refers to the hundreds of Methodist preachers also buried there, including as we now know, Samuel Coate.

A recent letter from Mr. Peter Baugh, Heritage Steward of John Wesley’s House and The Museum of Methodism, enclosed the burial record of the Chapel, which shows that “Rev. Samuel Coats” died 20th December 1813, age 38 years, and was buried on 31 December in grave No. 2615. He had been living in Knightsbridge (the street which runs south of Hyde Park), and a Mr. Hatchet of Westminster was the undertaker. The standard fee for the cost of the grave was one Guinea (one pound plus one shilling). Excavations in the 1950s revealed that below ground in the Chapel precincts is a honeycomb of vaults and bricked-in tombs full of lead coffins—over 5000 burials, the last being that of Dr. Jabez Bunting in 1858.

A Coate Brother who Stayed Home

Mr. Steelman also informs us that Michael and Samuel had a younger brother Asahel (or Azail, or `Sale) Coate (1781-1815) who remained at their home in Lumberton, New Jersey, where he was a class leader. It was a resting place for many preachers, and Bishop Asbury stayed there in 1807. In this house, which still stands, Azahel nursed Asbury during a 12-week illness in 1814. The Bishop’s Journal is silent during this period, but in his Reminiscences, the Rev. Henry Boehm gives some details of those days:

“On reaching home I heard that Bishop Asbury was sick at Brother Sale Coate’s, a brother of Michael and Samuel Coate, at Lumberton, New Jersey. On the 3d of May I went there and found him so very low he was scarcely able to breathe. The next day he appeared a little better… For ten nights in succession I sat up and watched with him … There was enough for two or three of us to do at Brother Coate’s while the bishop was so dangerously ill… He never fully recovered from that sickness, and he was physically unfit to go round his diocese again.”

Nevertheless, Asbury, who often said, “Live or die, I must ride!” did pursue his rounds until death and glory finally claimed him in 1816, at age 70.

Many thanks to Bob Steelman who so generously gave of his time to look up this material.

Coate, it seems, often travelled back to his home territory in New Jersey where he preached effectively at camp meetings. For example, in a letter from Montreal dated 25 September 1806, he wrote: “I had the honour of attending one of the greatest Camp¬meetings last July, near Dover [N.J.], that perhaps ever was known. Great numbers professed to have received, at that meeting, a sense of pardoning love of God, and others to have had the work of grace greatly deepened in their souls.” (Methodist Magazine, June 1807, p.285.)

We get a more personal glimpse of the power of his preaching from the following eye-witness account written by Rev. James Newell, a local preacher on the Salem circuit in southern New Jersey. The camp meeting was held in Brewer’s Woods on his circuit in 1809. Coate was then Presiding Elder of the Lower Canada District.

“Rev. Samuel Coates among other preachers was there. One sermon he preached I shall never forget; it was on the resurrection and the judgment, the appearance of the white throne, etc. He sounded the trumpet and the trembling earth gave forth its unnumbered millions, while the ocean rolled its inmates to the shore, Death and Hell gave up their victims, all taking their course toward, and standing before the great white throne, all trembling to hear the fiat of God, the terrible Judge. The grandeur, the sublimity, the eloquence of this description of the scene at the last days can never be forgotten. All eyes were fastened upon him, streaming tears attested the depth of feeling, while he threw open the portals of the mansions of bliss, and crowned the happy righteous with glory-gave them palms of victory and harps of melody-then moving toward the front of the stand the preacher began to drop the wicked into hell; and at last with a mighty effort plunged the whole of the condemned into the abyss, the bottomless pit of eternal woe. Such an effect I never witnessed before or since. Such screams and cries for mercy; such praying and shouting all over the vast assemblage of the camp ground; from all classes-for all were affected. Many of the Society of Friends were there. Charles Jones, a Quaker, became soundly converted and sprang upon a stump and preached to the people. The most respectable persons were down on the ground, rolling among the leaves, or prostrate among the seats; and a general surrender to the Lord seemed to prevail throughout the encampment. At the close an old Friend turned to me and said, “Thee has some great speakers in thy society; I never heard the like before.” This was a great day for Methodism; it took a position in Salem County and the counties adjoining never occupied before; not merely among the poor and illiterate, but the educated and influential.”

[Quoted in What God Has Wrought -A History of the Southern New Jersey Conference of The United Methodist Church, by Robert B. Steelman, p.49.]

“I have lately been in the United States, and attended some very great Camp-meetings; one in the state of Delaware, on the ground belonging to the old Governor, Mr. Bassett; another near Salem, New Jersey; a third in the upper part of Jersey, near Trenton, and a fourth at Croton River, in the New York State … At Salem, it was said forty or fifty were awakened under one sermon, the greatest part of whom joined the Society.”